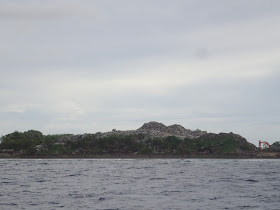 Today we went surveying off of the south side of Majuro, near the airport and the garbage dump, and found (drum roll please): lots of garbage!

The scientists at the Marshall Islands Marine Resources Authority call the pieces of trash "Majuro Corals."  There were some incredibly huge Acropora tables holding on, but much of the reef consisted of dead coral framework. 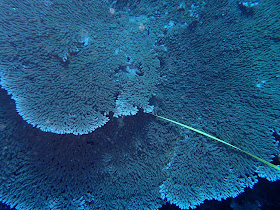 We talked to the expert "garbologist" (as he called it), Alice Leney, who helped Tarawa Atoll with their garbage control by creating a bottle and can recycling program with monetary incentives called "Kaoki Mange" ("Return the Rubbish").

He said not only are there not any incentives like that here, but infrastructure and space are an issue. The US sent American-sized garbage trucks to Majuro, which are completely impractical for the much smaller-scale operation needed on the island.

People are working hard on this issue here on the island to try to solve these problems.

In the mean time,  rubbish ends up on the top of mount Majuro.  A mountain with bounds.  After mount Majuro can climb no more, they've proposed to dredge up more reef to create more "land" for another land fill.

Most places in the world, we can go about our daily lives blissfully unaffected by the magnitude of trash we produce as a society.  We throw our rubbish in the garbage, a trash man comes and picks it up, and that's the last we ever see of it.

But Mount Majuro isn't unique.  We're just fortunate to have a place to put it.  For now.

But the impacts of our rubbish are here and now.

Inspired by the movie "American Beauty"